Hagibis has already caused major disruption to transport services, as well as sporting events in the country. It has been forecast as the worst typhoon to hit Tokyo in six decades.

Typhoon Hagibis made landfall in Shizuoka prefecture, southwest of Tokyo, around 7 pm local time (10:00 UTC) on Saturday.
The typhoon, expected to be the worst to have hit the country in six decades, lashed the country’s eastern coast with heavy rains most of the day.
Noncompulsory evacuation orders have been issued to roughly 600,000 people, according to public broadcaster NHK.
Hagibis has caused landslides and flooding, while an 5.7-magnitude earthquake was reported in Chiba, east of Tokyo.
One person was killed in the city of Ichihara, east of Tokyo, before the storm hit land, with local media saying he had been in a vehicle that overturned.

The centre of Typhoon #Hagibis is making its final approach towards #Japan. The town of Hakone, southwest of Tokyo, has recorded 645.5 mm (25.4″) rain in the last 12 hours. This is not far short of Japan’s record 12-hour rainfall total of 695 mm. 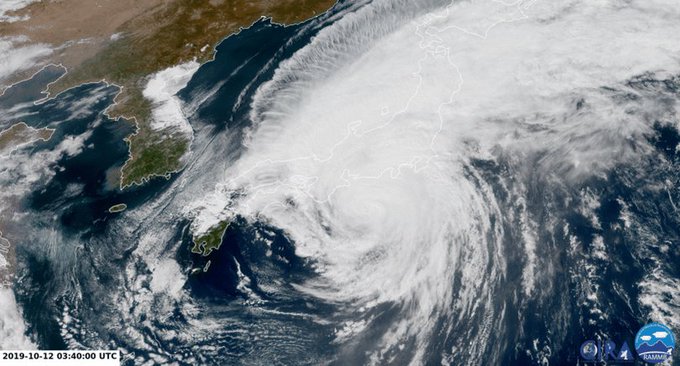 124 people are talking about this

Hagibis has already caused major disruption to transport services, as well as sporting events in the country. Two Rugby World Cup matches have been canceled and qualifying at the Japanese Grand Prix at the Suzuka circuit, five hours to the south of the capital, has been postponed. In excess of 1,600 flights have been grounded as Japan comes to a virtual standstill.
The Japan Meteorological Agency (JMA) warned of dangerously heavy rainfall in Tokyo and surrounding prefectures, including Gunma, Saitama and Kanagawa.
“Be ready for rainfall of the kind that you have never experienced,” said meteorological agency official Yasushi Kajihara, adding that parts of the country usually safe from typhoons might prove vulnerable this time.
“Take all measures necessary to save your life,” he said. Tokyo braces for Hagibis
Hagibis, which means “speed” in Filipino, hurtled towards the Japanese capital with winds expected to reach maximum speeds of 216 kilometers per hour (134 miles per hour), JMA said.
The JMA forecast up to 80 centimeters (31.5 inches) of rainfall.
People stocked up on water and food ahead of anticipated power outages.
Prime Minister Shinzo Abe’s Cabinet hosted a disaster management meeting Friday. He said 17,000 police and military forces were ready to be deployed to ensure the safety of citizens.
“The typhoon could cause power outages, damage to infrastructure and significantly affect people’s lives,” Abe said.
Japan receives approximately 20 typhoons per year, but it is not very common for Tokyo to be affected.
Hagibis is approaching just weeks after another powerful storm, Typhoon Faxai , resulted in two deaths and dozens of injuries in the city of Chiba.
The typhoon that hit the Tokyo area 61 years ago resulted in more than 1,000 deaths, as well as causing 500,000 houses to be flooded.