Negotiators from the European Union and the UK have reached an agreement on a Brexit deal, European Commission President Jean-Claude Juncker has said. Follow the latest developments live.

All updates in Universal Coordinated Time (UTC)
10:57 The EU’s chief Brexit negotiator, Michel Barnier, hailed the deal, saying it answered the uncertainty created by Brexit: “We have
delivered, and we have delivered together.”
The agreement still needs to be ratified by EU member states and UK lawmakers. Barnier said that Johnson “told President Juncker … he believed he was able to get the deal approved,” by British MPs, adding that Johnson said he was “confident about his capacity to convince a majority.”
The House of Commons on three occasions rejected previous Brexit agreements under Johnson’s predecessor Theresa May.
10:49 EU Commission President Jean-Claude Juncker has urged the 27 member states to get behind the Brexit deal. In a letter to EU Council President Donald Tusk, Juncker said EU countries are “best served by an orderly and amicable withdrawal of the United Kingdom from our Union.”
“Our hand should always remain outstretched as the United Kingdom will remain a key partner,” he wrote.
“I believe it is high time to complete the withdrawal process and move on as swiftly as possible to the negotiation on the European
Union’s future partnership with the United Kingdom.”
10:45 Finish Prime Minister Antti Rinne said: “The ball again is in the British Parliament(‘s court) … I hope it goes through this time.”
“I hope we are now at the end of this process. But there are still many doubts — for instance, inside the British parliament.”
10:41 EU leaders arriving in Brussels for a summit are commenting on the agreement. French President Emmanuel Macron said the deal was “good news.”
10:25 Britain’s main opposition party is “unhappy” with the new Brexit deal, Labour leader Jeremy Corbyn said in Brussels.
“From what we know, it seems the Prime Minister has negotiated an even worse deal than Theresa May’s, which was overwhelmingly rejected,” Corbyn said.
10:14 Dutch Prime Minister Mark Rutte said: “Very encouraging news that there is an agreement, now we have to study the details. But in itself very encouraging.”
9:50 The pound has surged following news of the provisional deal on Brexit. The currency, which has been volatile over the past week on conflicting reports of progress, jumped to $1.2934 (€1.16) from $1.2805 earlier in the morning.
9:35 Johnson has praised the deal between Britain and the EU, saying they have agreed on a “great” new Brexit deal and urging lawmakers to approve it on the weekend.
“Now parliament should get Brexit done on Saturday so we can move on to other priorities like the cost of living, the NHS, violent crime and our environment.”

We’ve got a great new deal that takes back control — now Parliament should get Brexit done on Saturday so we can move on to other priorities like the cost of living, the NHS, violent crime and our environment #GetBrexitDone #TakeBackControl

10.2K people are talking about this

9:34 “Where there is a will, there is a #deal — we have one! It’s a fair and balanced agreement for the EU and the UK and it is testament to our commitment to find solutions,” Juncker wrote on Twitter.

Where there is a will, there is a #deal – we have one! It’s a fair and balanced agreement for the EU and the UK and it is testament to our commitment to find solutions. I recommend that #EUCO endorses this deal. 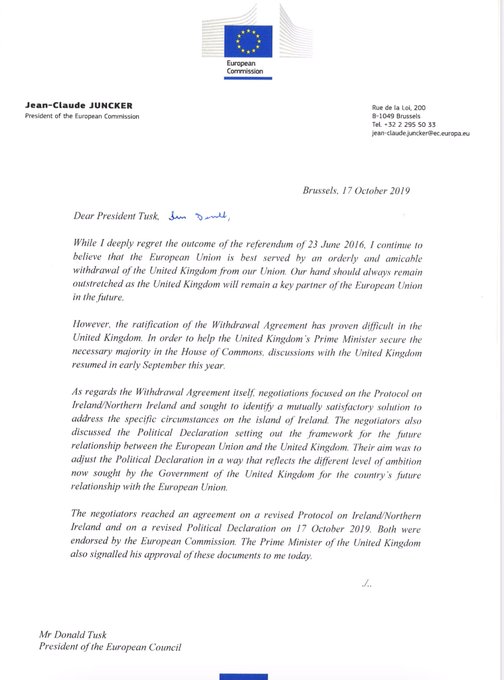 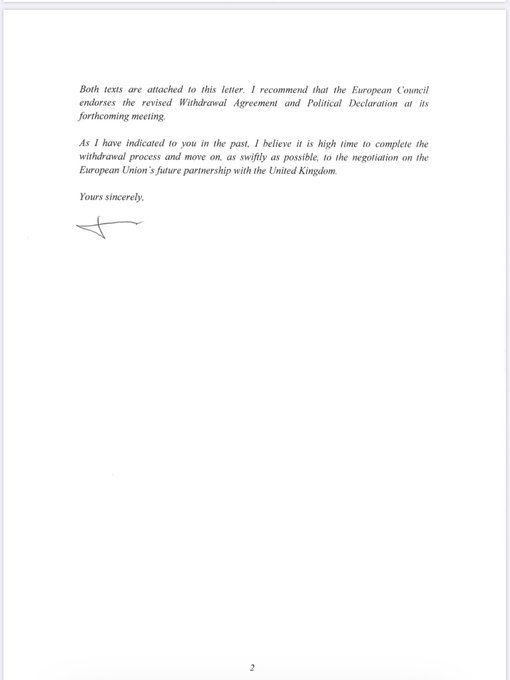 6,651 people are talking about this

8:35 The Democratic Unionist Party (DUP) of Northern Ireland has said it cannot back the terms of the current deal on the table.
“As things stand, we could not support what is being suggested on customs and consent issues and there is a lack of clarity on VAT,” the party leadership said in a statement posted on Twitter.
7:30 German Chancellor Angela Merkel addressed the German Bundestag and said that an “agreement is still possible,” which is, “why we need to continue to do everything to bring the negotiations to a successful end.”
law/rt (AP, Reuters, AFP, dpa)
Source: dw.com