President of IMANI Africa, Franklin Cudjoe has called on organisations and individuals campaigning for a ‘NO’ vote in the December 17 referendum to come together and advocate for change in the characteristics of politics they find offensive.
According to him, the ‘YES’ vote will encourage the growth of smaller political parties in the country, hence it is sad people are against it.
Taking to his Facebook page in a series of posts, Mr Cudjoe said the ‘YES’ vote will also help “break the NDC-NPP duopoly and contribute to national development, but the rather thoughtful NO campaigners aren’t having this conversation- instead, they just believe, emotionally, that it is a bad idea. Sad.”
Franklin Cudjoe who believes the ‘NO’ campaigners stand is cowardly, charged them in another post to focus on dealing with the wrongs they see in politics such as vote buying as “there is no certainty that even non-partisan local elections will be completely clean of this practice as long as there is demand.”
The National House of Chiefs, National Democratic Congress and other institutions as well as individuals, in recent days, have urged Ghanaians to vote ‘NO’ in the December 17 referendum which seeks to amend Article 55 (3) of the 1992 Constitution thereby making local government elections partisan.
The House of Chiefs in a statement issued and signed by its President, Togbe Afede XIV, argued that effective decentralization would negatively be affected by the control of local parties given that the constitution was purposely designed to protect local level governance.
The main opposition party, NDC, also believes the consequence of exporting this polarization into the District Assemblies will retard development, and “that is unhealthy for Ghana’s democracy.”
Legal practitioner, Samson Lardy Anyenini earlier this month noted that allowing political parties in local elections will further compromise and deepen the political divisiveness in the country.
“Let’s not allow the entrenchment of this recklessness that has made the benefit of democracy elude us. What do we see in parliament? the impunity and the reckless that has not benefited us over the years. So let’s go and vote ‘no’ to show them that we have had enough of the unproductive system,” he argued while contributing on the Shaping the Nation show on Starr FM.
But Franklin Cudjoe holds a different view.
Read his posts below 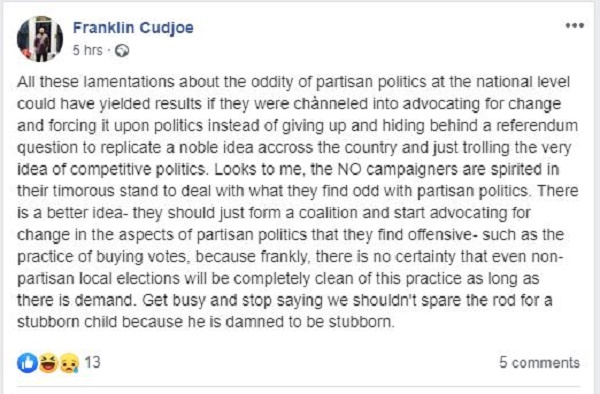