The Economic and Organized Crime Office (EOCO) has described as erroneous claims by the Auditor General that its move to investigate him over alleged procurement malpractices, is unconstitutional.

It has also described as misplaced, the Auditor General’s claim that the investigations are aimed at removing him from office.
In a statement issued on Wednesday, November 27, 2019, and signed by its Head of Public Affairs, Jacqueline Avotri, EOCO, explained in detail why it was pursuing the Auditor General.
The Auditor-General, Daniel Yaw Domelevo, lamented recently how his trial in the hands of EOCO was unconstitutional.
The trial is in relation to alleged procurement breaches in respect of some vehicles procured by the Ghana Audit Service (GAS) in 2018.
In a November 18, 2019 letter addressed to the Acting Executive Director of EOCO, Mr Domelevo bemoaned his woes in the hands of EOCO.
He narrated in the letter that for close to four weeks now, EOCO has been inviting officers of GAS including himself on the premise of investigating the alleged procurement malpractices.
“I was personally invited by a letter dated November 7, 2019, which invitation I honoured out of respect for your office on 14th November, 2019 only to be cautioned by your officers and asked for a caution statement which I gave,” his letter sighted by DGN Online read.
It added that “I had had to be granted bail – thanks to my driver – before I was allowed to leave your premises.”
In the letter, the Auditor General argued strongly that EOCO does not have the jurisdiction to investigate corruption-related offences which have been defined in Act 959 to include breaches of procurement.
He further argued in the letter that “it is quite bizarre and unfathomable why your office would purport to be investigating procurement breaches when in fact it does not have any legal authority to do so unless there is any hidden or ill motives behind your actions.”

EOCO Response
However, in response, EOCO said the position of the Auditor General that the investigation it was conducting is improper in law as the Office of Special Prosecutor is the sole body authorized to investigate suspected procurement breaches, is legally erroneous.
Again, EOCO said the claim by the Auditor General that its investigation was not competent to secure the removal from office of an Auditor General, was legally erroneous.
According to the statement, per section 3 of Act 804, the functions of the Office (EOCO) are to (a) investigate and on the authority of the Authority General prosecute serious offences.”
It explained that serious offences are further defined in section 74 of Act 804 extensively and not restricted to corruption-related offences.
According to the statement, Section 79 of the Special Prosecutor Act, Act 959, is limited to corruption-related offences under the category of the serious offence of the EOCO Act.
“It does not oust the jurisdiction of EOCO from investigating other serious offences that are not necessarily of a corruption-related nature,” it added.
The statement noted categorically that the investigation by EOCO is not aimed at the removal of an Auditor-General from office.
EOCO is neither seized with the power to nor interested in removing an Auditor-General from office, it said.
It noted that investigations by EOCO of the various individuals are in line with its legal mandate and purely borne out of the due process.
“The attempt to equate EOCO’s investigation to constitutional processes for removal from office is additionally misplaced,” the statement pointed out. 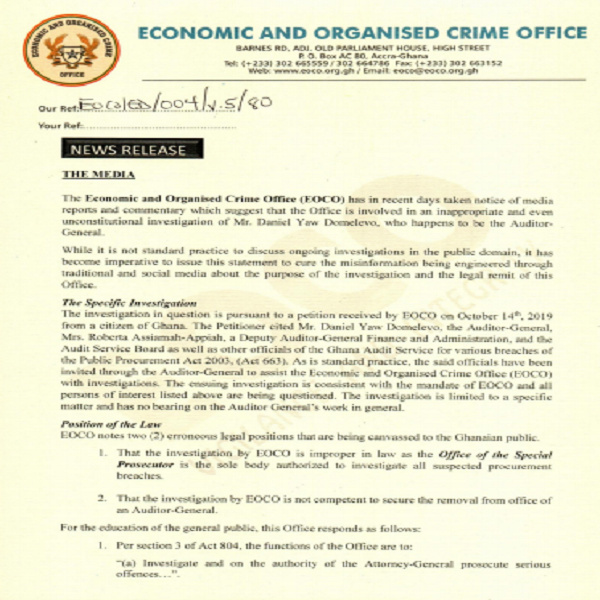 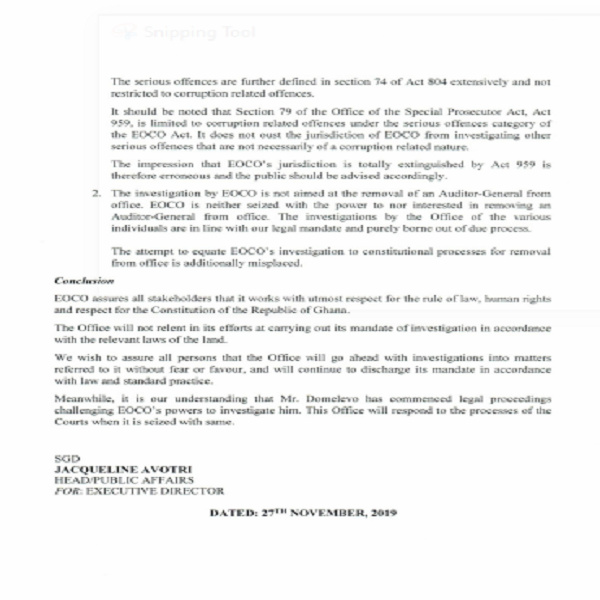