Africans of yore have always believed in animism – the attribution of a living soul to plants, inanimate objects, and natural phenomena.
It is what led the ancient Egyptians to ascribe so much power to the sun god Ra and of Anubis, the god of the dead.
In Ghana, three shrines or deities of fearsome reputation are Akonedi, Tigari and then Nogokpo, the latter of which our focus dwells in this piece.
Nogokpo is a deity revered by the Anlos of the Ewe stock of Ghana. Its location of same name is a village situated in the Ketu South Municipal of the Volta Region of Ghana along the Trans-West African Coastal Highway.
The Nogokpo shrine was reportedly first served by Torgbui Sabah in the 1900s and according to Torgbui Agbodzalu Amuzu, the deity has its origins from Agbozume, another Volta regional town.
The Nogokpo shrine earned its fearsome reputation for rendering justice for those who reckoned they had been wronged and hence wanted justice or retribution.
Those who come to the shrine had largely lost trust in Ghana’s legal system because of bribery, skewed ruling or the long years of adjudication.
A journalist with Ghana’s Multimedia Group who visited the shrine observed that certain areas in the village could only be accessed by going barefoot.
A regent of the Nogokpo shrine, Torgbui Agbodzalu Amuzu, said that contrary to rumors that one could have another killed wantonly, the Nogokpo deity does not shed blood without cause.
He added that punishment is only meted out to unrepentant people whose families pay the ultimate sacrifice of death or get to permanently stay at the shrine as judgment does not only affect the guilty but also his or her immediate relatives. 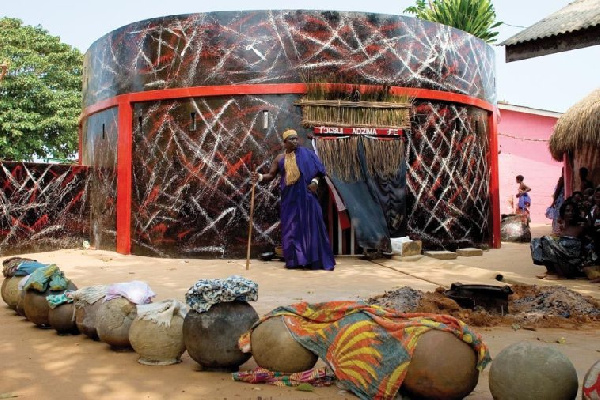 via howghana.com
Thanks to its fierceness and just judgment of the guilty, there’s no incident of stealing in the village, according to reports. The shrine is known for its thief-catching spells as well as its other mystic offerings.
According to regent Amuzu, when a suspect, despite persuasions to spill the truth, refuses to own up to a crime, that’s where the deity is at its devastating best.
Curiously, a relative of the punished must be given to serve the shrine lest more calamities befall the family.
He also submitted that during the fight for independence from Britain, Kwame Nkrumah, at the forefront of the struggle, visited the Nogokpo shrine in 1956.
He was eager to receive all the help he could get while campaigning for the plebiscite to have that part of the country be officially recognized as part of Ghana.
The claim is not far-fetched given Nkrumah was known as a regular visitor to the Tigari shrine.

admin Administrator
Sorry! The Author has not filled his profile.
web
https://thedailyreportgh.com
Related tags : A look at the Nogokpo deity of the Anlos of Ghana feared for its thief-catching spells