Although the English and Americans are the European superpowers today, there was a time that power lied in the bosom of the Portuguese and Spanish.
Researcher and historian at the University of Ghana’s Institute of African Studies, Kweku Darko Ankrah, notes that Elmina in Ghana’s Central Region is the first European settlement in West Africa.
Historian J.E. Condua-Harley notes: “When the two Portuguese navigators, Santarem and Escobar, reached the shores of Ghana in 1471, they found gold dust in abundance in the Shama-Elmina area.
“They subsequently gave the area the name ‘A Mina’- the mine,’ thinking there was a gold mine somewhere in the interior not far from the coast. ‘A mina’ later became the ‘Mina Coast’ and ‘Gold Coast’ is therefore a translation of the original Portuguese name.”
Elmina, the first town in West Africa to receive Europeans, has from the 14th century changed hands between the Portuguese, the Dutch and the British.
During the transfer of the ownership of Dutch possession in Elmina and Gold Coast to the British in 1872, an Elmina native, George Emil Emisang, the first Western-educated lawyer in the Gold Coast and an authority on aboriginal law of the Gold Coast, facilitated the transaction.
By the 1480s, Elmina was also called “the village of two parts” by the Portuguese because of the little River Benya, which skirts the north-eastern walls of the castle and formed the boundary between the states of Edina and Fetu, according to J.D. Fage.
Although originally a Guan settlement, Elmina has become a Fante town with the people viewing themselves as full-blooded Fantes, thanks to assimilation with some 40,000 inhabitants.
To the native Fantes, it is “Edina” but Elmina or “La Mina” to the Portuguese. It remains an important fishing town, serving as the capital of the Komenda/Edina/Eguafo/Abirem District in the Central Region. 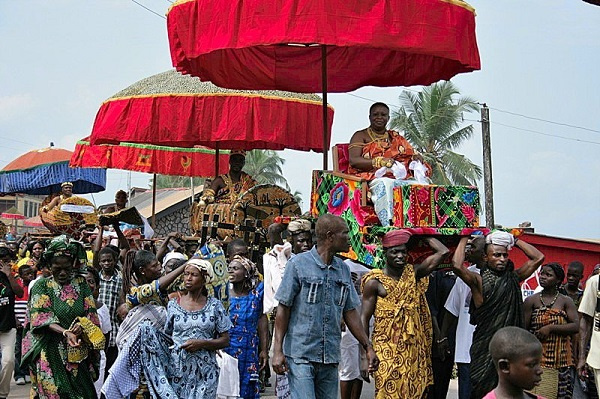 Elmina chief via kwekudee-tripdownmemorylane.blogspot.com
Kwaa Amankwa is credited as the founder of the town, with the natives recounting that the Portuguese explorers who first visited their land took some Elmina sailors to the town of Moguer (in Huelva, Andalusia, Spain).
Kwaa Amankwa is said to be the eldest son of the king of the Ancient Guan Kingdom of Aguafo. According to Rev. G. Acquaah, the chief towns of the Guan were Efutu, Aguafo, Kromantse and Edina whiles Henige in his ‘Chronology of Oral Tradition’ names Eguafo, Jabi (later Shama), Abrem, Fetu, Edina and Asebu as its states which the Fantes acknowledge as non-Fante states.
According to the folklore, Nino, being one of the captured sailors, sired four famous sailor children namely Pedro Alonso, Francisco, Juan and one other Niño.
The most famous was the navigator, Pedro Alonso Nino, also known as El Negro (the Black). The four Niño brothers became sailors with prestige and experience in Atlantic journeys before playing a distinguished part in Columbus’s first voyage to the New World.
The participation of the Pinzón Brothers in the Columbian enterprise was the key to overcoming the doubts among the region’s sailors. It is documented that the help of the Niño Brothers made it possible to defeat the opposition among the men of Moguer to take on an enterprise of uncertain outcome. 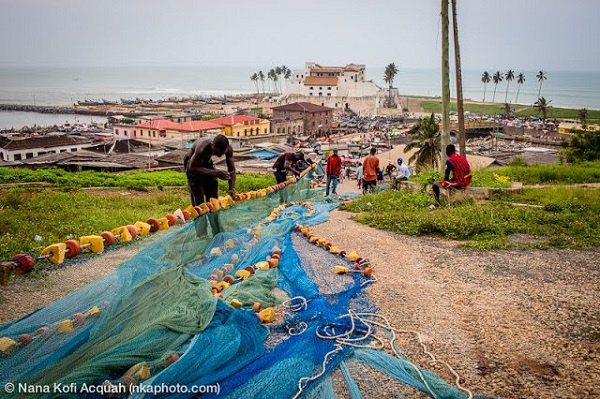 On Columbus’s first voyage, Pedro Alonso Niño was pilot of the Santa María; Juan Niño was master of La Niña, of which he was the owner, and Francisco Niño is believed to have been a sailor on La Niña.
The Niños took part as well in Columbus’s second and third voyages. Between 1499 and 1501, they travelled on their own account, following the route of Columbus’s second voyage to the Gulf of Paria on the South American mainland in what is now Venezuela.
Another Elmina girl was taken to Spain where she gained the attention of the Europeans due to her artistry intelligence. Called Isabelita Hermonia (1632-1692), the young girl became the first Gold Coaster (Ghanaian) to start painting.
Many Ghanaians are oblivious of the ramifications of Elmina’s interaction with the Portuguese. It emerged that most of the African descendants living in Holland, Netherland Antilles, Surinam, Java in Indonesia are indigenes of Elmina.
“It started from the involuntary migration of tens of thousands of slaves to the plantations in Surinam to the little known history of the African soldiers who sailed from Elmina to serve in the Dutch army in the East Indies; and from the role of Dutch genever in Ghanaian ritual to the dramatic life story of Jacobus Capitein, the first black Christian minister to be ordained in the Netherlands,” according to Kweku Darko Ankrah.
Till date, the Elmina people maintain a strong relationship with the Dutch government.
Jacobus Elisa Johannes Capitein (1717-1747), an Elmina native, is one of the first known sub-Saharan African to study at a European university.
Elmina is one the few towns in Ghana with a larger mulatto population and its inhabitants still bear their Dutch, Portuguese and other European names such as Vanderpuiye, Planque (Plange), Dacosta, Waartemberg, Ballmos, (Van Dijke) Vandyck, Ruhle, Bartels, Nieser (Neizer), Vroom, and De veer (De heer).
The people of Elmina are known for the celebration of two important festivals; Edina Bakatue and Edina Bronya. The town is a major tourist destination site in Ghana, hosting two UNESCO World Heritage protected sites: the castle of St. George d’Elmina and Fort Coenraadsburg on St. Jago Hill.
These sites attract over 100,000 tourists annually, with about 50,000 coming from abroad.
The Portuguese explorers, Juan de Santaran and Pedro d’Escobara, landed in Elmina in 1470. On January 19, 1482, 600 men, led by Don Diego d’Azambuja, arrived in Elmina in twelve ships from Portugal to build the George’s Castle.
The construction of the castle “initiated the development of Elmina, both as a regional commercial centre and as a node in an international trading network, spanning three continents.”
Competition between European trading nations for strategic positions on the West African Coast grew in the 16th and 17th centuries, but the Dutch and the British eventually gained the upper hand.
The Dutch conquered Elmina in 1637, by attacking the castle from the landside with the assistance of local allies. For the next 235 years, the castle became their headquarters while the town thrived on various economic activities throughout the 15th and 19th centuries.
Until 1873, the original African town of Elmina was situated in front of the castle of St. George d’Elmina, having about 150,000 inhabitants.
About a year after the transfer of the Dutch possessions to Great Britain, the British bombarded and burnt the town because of their defiance. It is said that after the bombardment, the British did not allow any building in the area. Till date, it is an open space.

admin Administrator
Sorry! The Author has not filled his profile.
web
https://thedailyreportgh.com
Related tags : How the people of Elmina became the first Africans to receive Europeans in West Africa