For the first time in 10 years, an Israeli leader joins German lawmakers in remembering the Holocaust. The anniversary of the liberation of Auschwitz death camp comes amid rising anti-Semitism in Germany.

Israeli President Reuven Rivlin on Wednesday joined German Parliament in Berlin in remembering the 75th anniversary of the liberation of the Auschwitz death camp.
Rivlin and his German counterpart, Frank-Walter Steinmeier, both addressed lawmakers in the Bundestag on Wednesday morning.
Rivlin is only the second Israeli leader to address German lawmakers in Parliament for the annual event that remembers the atrocities of the Holocaust. Former Israeli President Shimon Peres spoke to lawmakers at the ceremony in 2010.

The commemorations come on the backdrop of signs that anti-Semitism is on the rise in Germany and in Europe.
‘Together we stand up for values’
Rivlin, addressing German MPs, said: “I stand here and say that German and Israel are partners. Together we stand up for our values: against anti-Semitism and xenophobia and against the destruction” that occurred 75 years ago.
“Ugly and extreme anti-Semitism is hovering over the whole of Europe,” he said, and that the continent was being “visited by ghosts from the past.” 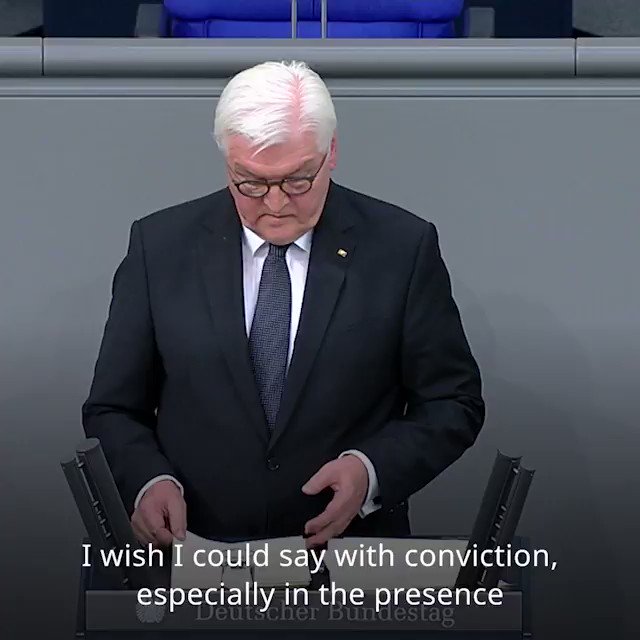 Germany has a special responsibility to prevent the horrors of the Holocaust from happening again, he said, adding that the same country that brought the horrors of Nazism to the world had today become a “lighthouse” for the protection of liberal values.
“We all know today that it’s not a fight that can be concurred with one blow. It’s a fight that must be fought persistently generation after generation…we can’t give up…Germany cannot fail.”
The Israeli president also dedicated part of his speech to criticizing Iran, calling the country a threat to world peace that must be isolated.
Steinmeier: ‘The Holocaust is part of German identity’
Ahead of Rivlin’s address, the German president in the Bundestag called the Holocaust a part of German identity.
“The Holocaust is part of German history and of German identity,” Steinmeier said, and went on to say that Germany must remain vigilant in protecting the memory of the past.
“The evil spirits of the past are reappearing today under a new guise. More still, they are presenting their ethno-nationalist, authoritarian thinking as a vision, as a better answer to the questions of our time,” he said.
“Those of us in this room who believe in democracy take it for self-evident that our country must grapple with historical guilt.”
“We won’t forget what happened. And we won’t forget what can still happen.”
source: dw.com