Although ministers have repeatedly warned against coronavirus hysteria, some supermarkets have reported customers bulk buying supplies. In Germany, the number of cases has almost doubled in a day to 129. Germans are slowly coming to realize that they, just like 50 other nations in the world today, could soon be facing a coronavirus epidemic. Indeed, the pathogen has become a major topic of discussion in the country – so much so, in fact, that some residents are now stockpiling food out of fear they could be placed under quarantine.

Bulk-buying supplies
On Friday, a spokeswoman for one of the country’s largest supermarket groups, REWE, told DW that while they didn’t register any panic at the start of the week, the situation quickly changed.
“We have noticed rising foodstuff and canned goods purchases across the entire country to which we are adapting accordingly,” said Kristina Schütz from REWE Group, which is headquartered in Cologne and runs the Penny, REWE and Nahkauf grocery chains.
Discount chain Lidl has recorded a similar spike in purchases, with a spokesperson confirming that “we are noticing a rise in sales in certain regions and stores.” According to the chains, Germans are stockpiling long-lasting and canned food, pasta as well as toilet paper and disinfectants. 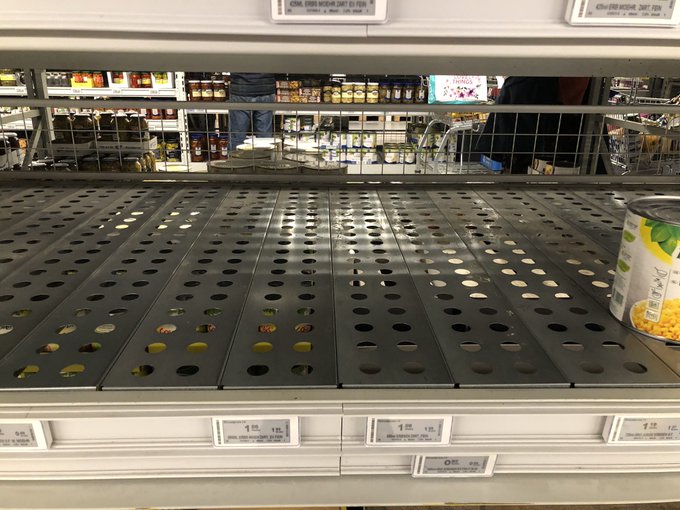 What do authorities recommend?
Four years ago, the Bonn-based Federal Office of Civil Protection and Disaster Assistance (BBK) published a checklist of long-lasting foods it recommends stockpiling for emergencies.
The BBK, which is staffed by some 300 civil servants, educates the general population on how to prepare for crises. It advises Germans to stockpile food and drink for about ten days.

Coronavirus infections in more than 50 countries

Specifically, the checklist states that one person needs 14 liters of liquid a week, and recommends stocking mineral water and fruit juice in particular. Even so, the BBK warns against panic buying, advising Germans to stockpile only foods and drinks “that you and your family would consume anyway.”
The BKK also suggests stocking food that keeps for a long time without needing refrigeration, to pay attention to sell-by dates, and mark when items were purchased, in case they don’t have dates printed on them. It also advises Germans to “store newly bought food items at the back of the cupboard so that you consume older items first.”
Sound advice
This comprehensive emergency checklist hasn’t gone unnoticed abroad. Bulgarian daily 24 Tschassa, for example, praised the advice provided by German authorities, saying that in most cases “consumers just hoard all kinds of products – without a proper idea how long they will come in useful or whether they might need them at all.”
The paper said sticking to the German checklist is a good idea “as it makes no sense to buy excessive amounts of supplies.” It hasn’t got this bad in Germany yet. After dozens of deaths, many Italians are wearing face masks to the supermarket

Warning against stoking fear
While many pundits in Germany agree the list is useful, they simultaneously warn against stirring hysteria. So far, Germany has confirmed 129 cases of coronavirus, with 16 having already recovered, and no deaths reported. More than half of the cases are in the western state of North Rhine-Westphalia, the country’s most populous state.
The German Journalists Association (DJV) therefore emphasizes that media outlets should avoid stoking fear.
Accordingly, DJV head Frank Überall stated that “people need clear information as well as advice” to make sense of the situation.
He has called on journalists to heed the German press code which calls on them to “avoid an inappropriately sensationalist tone when reporting on medical issues, as this may give rise to unfounded fears or hopes.”
The press code also states that “stoking fear and hysteria is incompatible with responsible journalism.”